I have heard that my Spanish grandmother had 14 siblings and came from a family in a mountain village somewhere inland of Spain.

As probably happens to many when young and the elderly start talking about their roots and history, I used not to be very interested in listening or taking notes. Now I would love to be able to turn back time to really listen and take notes when stories were told about my family history. Today no one is left that remembers the times when my grandmother was young and grew up in the village of Villar del Cobo. Yes, I did eventually find out the name of the town.

For this trip, I decided to take my family there and I looked up where in Spain Villar del Cobo was. Who would have imaged what happened then? What an adventure awaited me.

I had many occasions to get butterflies in my stomach. First, it was caused by the very windy road to get there. It had been a snowstorm a few days before and we were lucky that the road had been cleared of all the fallen logs. But we always thought that maybe around the next corner we would get stuck. But when you have your house always following you with food and a heater then you can easily control these nervous butterflies in your stomach. If you get stuck you will not starve or be cold until help arrives. 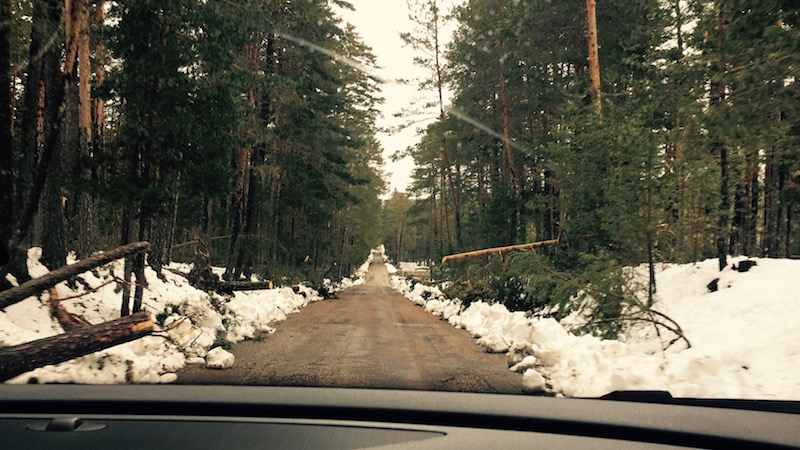 The butterflies returned when we finally saw the sign Villar de Cobo. I had come to the town where my ancestors came from. I did not know what to expect? I only had in my head what my father had told me, that it was a little town in the mountains with a fountain in the middle. He had never been there by himself but had heard it from his brother. I was so eager to get out of the car and explore. However, with a temperature of just 5 degrees Celsius, the rest of the family shared not the enthusiasm. Again what a treat to have your house with you. They stayed in the caravan to play some games while I got dressed for exploration. The plan was to have a look around and maybe talk to some people. Just a couple of hours and we would be on the road again. However, the beauty of life is that it always has it owns plans for you. 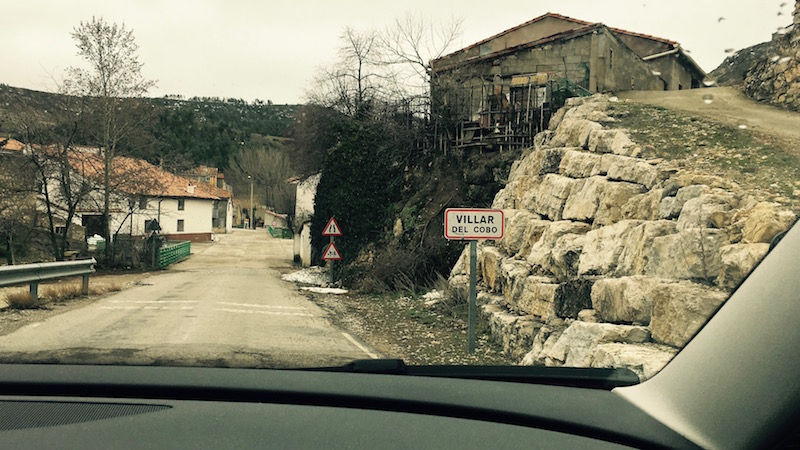 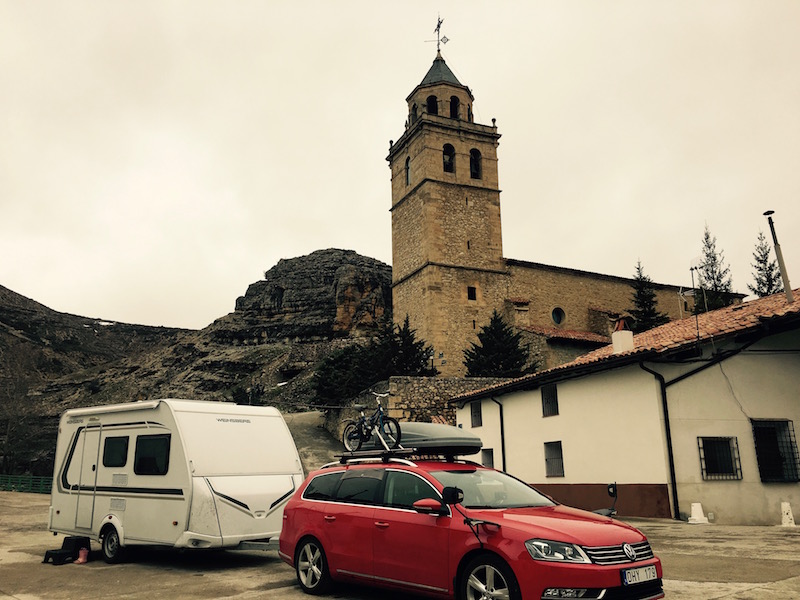 I started to explore. I have to say that the for the first ten minutes I actually cried. I guess I just got very emotional. The town was totally empty and many old deserted houses showed that this was a place of the past, not the future. I did not see a single soul. The first living thing I saw was a tied up horse looking at a peacock. A very surreal moment I must say. 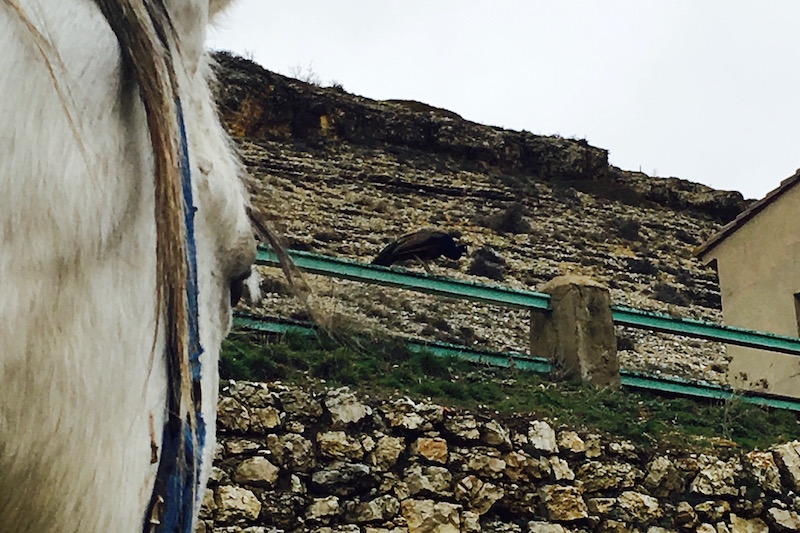 I then found the plaza with the fountain and an old woman walking on the road. She took a few steps back when I approached here. I guess not many strangers ever come to Villar del Cobo. I said that I was visiting the town because my grandmother was born here and I knew that her father had been the blacksmith. She took a step towards me and pointed at a building saying that there was where the old workhouse for the blacksmith had been. Then she suggested going to the bar. There would be some people sitting there I could talk to. 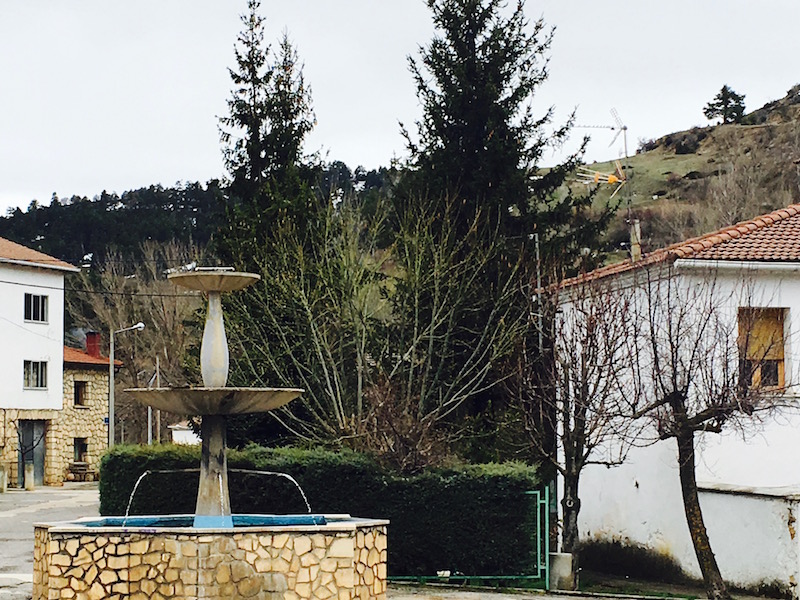 I walked into the hidden bar (no way one would find that entrance if not pointed out to you). Four people were sitting there and looked suspiciously at me. However, when I told them my story they lightened up. After some heavy discussion to determine who my grandmother was and what generation blacksmith I was talking about they told me that there is one family in the village that has the same surname as my grandmother (how lucky that a person always keep maiden name in Spain). They said that an old couple lived there and they were still very clear in their mind.

One of the ladies from the bar followed me to the house to introduce me. The butterflies in my stomach made another appearance. There beside the wooden fire sat two elderly women. They invited me to sit down and history started to unfold. I had found some actual relatives of mine in this little remote mountain village.

Sitting there was the wife of my dad´s second cousin. She told me that she had known my grandmother Candida and even travelled with her and her sister Agila to Zaragoza where Agila lived. She and Candida kept on going to Vilanova y a Geltrú where my grandmother lived. She also said that all my grandmother's brothers and sisters (altogether 14) had left Villar de Cobo and that she had lost contact with that side of the family.

We talked for a while about old times and about the town Villar del Cobo that now has only 80 inhabitants left. I was already standing up to end the conversation and to go out to the rest of my family when I said: "How sad that your husband is not alive I would have loved to meet him." She looked at me and smiled: "But he is alive." Again, I got butterflies in my stomach and I sat down again on the old sofa and she said that he was out with his two sons working. Their livelihood was working their land and caring for their sheep. They said I should wait and indeed not long after Vicente, my dad's second cousin, appeared, an old man smiling and giving me kisses and hugs. Soon we established that we would stay a night in Villar del Cobo spending time with family, a family with a very different lifestyle from us living in Sweden.

Everyday, seven days a week, they are working and taking care of their sheep they sell for meat. They also cultivate the feed for the sheep. The day we meet they were cutting off the tails of the lambs (for hygienically reasons they told me). The tails they later put in a stew to eat with rice. 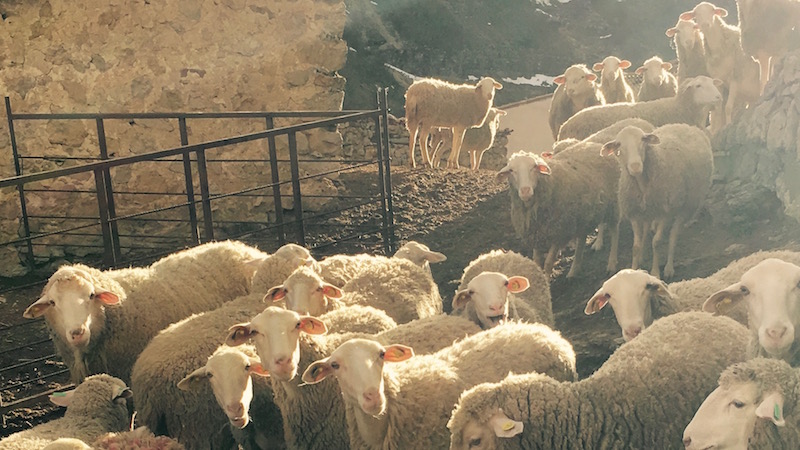 Everything is used, nothing is going to waste. I told them I don’t eat meat because I don’t like the animal industry where the animals can’t live a free life and are not able to show their natural behaviour. They were very understanding about it and did not at all question it. When we left they gave us a dozen egg and told me with a smile that they are from happy chickens that are roaming their land happy and free. I guess the chickens were happier than their four dogs. All tied up in a little dog cage with so much excess energy that they just ran back and forward until their leash stopped them. They only got out when it was time to hunt or mushroom season (one dog searched for “trufa”). I tried to influence them that the dogs maybe were not so happy with their tied up life. But they said the dogs where very good taken care off. They got food every day, they had a wooden hut to protect them from the weather, the cage got cleaned every day and if it was snowing then they took the snow away. They are nice people that take care of their animals as they know best.

They told me that living in a mountain village is very hard. That is why almost no young people stay. This year the school closed because there was only one kid left. But amazingly this village still has a pharmacy, a doctor, a little store and a bank and a big church. The key to the church my relatives kept for many generations to help the priest, who comes there once a week, to hold the service. We even got a private tour of the church. A very big and nice church that unfortunately got plundered during the civil war. For example, the entire orgel was stolen during the war and of course, there was no money to replace it. One of the remaining original artefacts was the font. The very same font my grandmother had been baptized in. Once again butterflies. 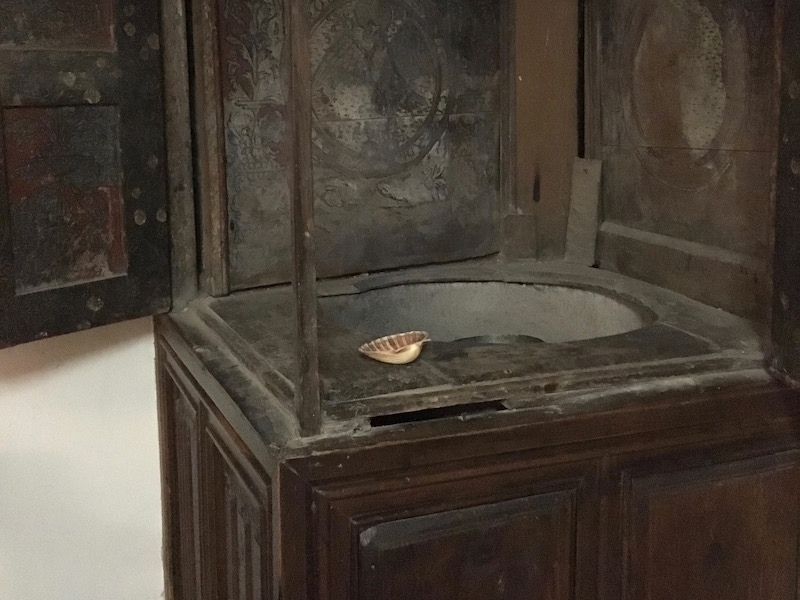 When I finally left Villar de Cobo I left with the words:" Aquí tienes familia en la primera casa de la calle o la ultima casa de la calle. Depende en que dirección vas. Facil de acordar. " (The first house or the last house on the main road you will find your family, very easy to remember). I will for sure remember that and I will be back again to visit my newly found family. 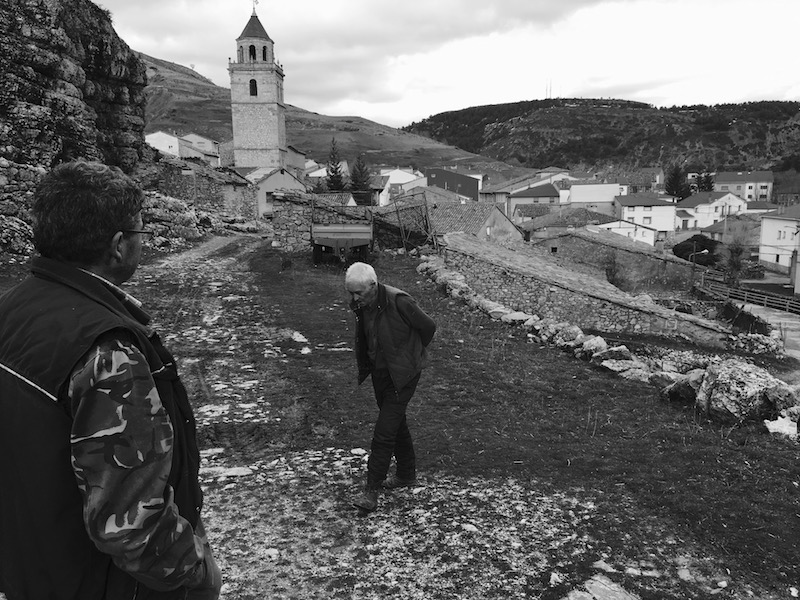